A Lesser-known Agfa - The Solina 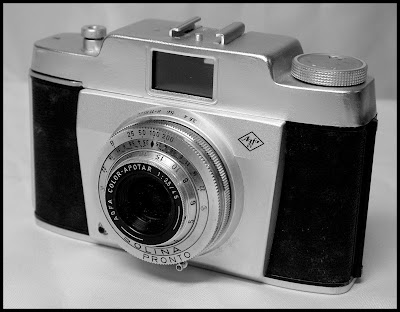 I do like trying out old cameras. Sometimes I am disappointed in the results, other times surprised. In today's digital world, most of the cameras operate so similarly that one can pick up a Nikon or a Canon or an Olympus and begin using it without too much thought. Not so, back in the days of vintage cameras. Some designs (like the Kodak Retinas) had the film advance lever on the bottom, or on the left (Exakta), or perhaps it was a knob to wind the film (many designs) instead of a ratcheting lever. Some cameras have rangefinder focusing, others scale focusing. The variations on a pretty basic set of features is amazing, and perhaps that is why so many people like collecting old cameras.

The Agfa Solina pictured above, was made from 1960-62, and features a 45mmm Agfa Color Apotar lens (I'm thinking 3 elements), witha maximum aperture of f3.5. Shutter speeds range from B-1/200, and it has scale focusing. According to McKeown's it was distributed in the USA by Montgomery Ward. Current value is from $25-$40.

Okay, enough of the the geeky stuff -- how does the camera perform? Well, I have shot 2 rolls of film in the camera, and it reminds me a bit of the Kodak Retinette with similar features. The only knock on the camera might be the scale focus, since that's always a problem between 3 feet an 20 feet at wide-open apertures. Otherwise, it is a lightweight camera with a nice clear viewfinder and is simple to operate. Here are a few recent photos: Posted by mfophotos at 1:27 PM

Also how many cameras do you own?!

Hope all is well,
Kat

Hey! I recently bought a Agfa Solina Pronto. I found your blog while trouble shooting the camera. When I press the release lever, the aperture doesn't move at all. Do you have any advice?