Back in July, the fine folks at the Film Photography Project announced that they were giving away rolls of Kodak's newest film, Portra 400. I'm always eager to try a new film, and having been delighted with Kodak's Ektar 100, I sent FPP a short email describing my blog and that I would be happy to test it out. A week or so later, I received a package in the mail.. 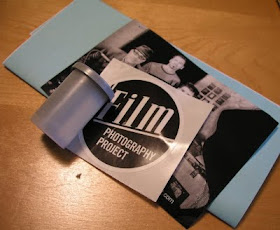 I loaded the film into my Nikon N8008, and went out shooting with it over the next few days. I shot the film at box speed, with nothing special, no testing at ISO 1600, etc. Just shooting it like I would most films is my test. Why try something with it that I normally would not do, anyway? After I shot the roll, I mailed it to The Darkroom for the free processing that accompanied the roll from FPP. This evening, I received an email from The Darkroom notifying me that my scans were online and that my order was on the way back with the processed film and CD. So, I am selecting a few of the shots to share here - none have been post-processed by me - they are exactly as they appeared online at The Darkroom site.

Old deer skull in the garden

Case of the cups

Amtrak at the crossing


My overall impression? THIS FILM IS REALLY, REALLY, GOOD. Granted, I did not do some exhaustive testing, but I did shoot the things I typically do. I love the colors, the smoothness of the film, and of course, although I did not scan this batch, I will scan the next roll that I purchase. The scans look very clean and this film is very fine-grained. Kodak has scored a hit with this film -- shadows are good, sharpness great, and grain negligible. In fact, I hate to say this -- but it almost is so perfect-looking as to appear digital -- but with a LOT more latitude -- see how the shadows are not blocked out the the street photo at the beginning.


My recommendation -- buy this film - buy a lot of it. Kodak deserves some praise for "getting it" when it comes to workflow, as for me -- and with most film shooters today, the scanner is a large part of the routine. Portra 400 seems to have all of the qualities we have been looking for in a C-41 color film - speed, latitude, color, and "feel." Kodak is producing this film in a multitude of formats - 35mm, 120, 4x5 (and maybe 8x10?), and I hope it hangs around for a while.

My thanks to the Film Photography Project for the opportunity to try out the Eastman Kodak Portra 400 and testing The Darkroom's services. Both are outstanding.

If you are trying to spam, sell digital crap, link to an external sales site, it will be deleted. I welcome respectful dialog and comments.