A few months ago I received two rolls of film to test for the Film Photography Project-- Film Washi's "newest" films - Washi F and Washi S.   Now, you already know that I am someone that likes to play with oddball film stocks, and these two films certainly fit that description.  First, let me acquaint you with them from the information furnished by Film Washi.

Film Washi touts itself as the world's smallest film company.  Based in France, Film Washi first came to our attention with the hand-coated Washi films that were produced on thin Washi paper.  From the Film Washi site:   "Founded in 2013 by Lomig Perrotin in a closet of his Parisian flat, Film Washi grew up while staying a one-man-business. The company’s facilities are now located in Saint-Nazaire, on the western coast of France.

The company’s ethos is based on values of innovation, simplicity and ecology. The adopted processes link it to the Maker and DIY movements: recycling takes an important part in the making of films, and many production tools (including 120 rollers, 135-cartridge loader, or IR glasses) have been made out of recycled parts.

With more than 25.000 films sold since it was created, Film Washi stays a relatively minor player on the analog photography market. It does not try to compete against major film makers, but to complement them instead, offering photographers a different, novel approach to analog photography."

Back to the films...

Both of these film stocks are emulsions originally produced for a far different purpose than conventional pictorial photography. Film Washi describes them as:

F- Film F is a special fluorographic x-ray film used for mass lung disease diagnoses. Being coated without anti-halation layer, this unique film offers a high diffusion effect and beautiful grain.  The suggested ISO for this film is 100, and it is an orthochromatic film that is insensitive to red.

S - Film S is used for motion picture sound recording which needs ultra high definition guaranteed by an anti-halation layer between the film base and the emulsion layer.  The film has almost no grain with high contrast, and while it is panchromatic, it is not completely red sensitive, topping out at 620 nm.  The recommended ISO is 50, and because of light piping, you should load the film in dim light and advance a few frames before shooting with it.

I shot Film S on May 1, using my Nikon N2000 with a 28mm Nikkor lens. It was an overcast day in Ann Arbor with diffuse lighting.  Many of my photos featured architectural subjects with lots of detail. I figured that if the film was fine-grained and high contrast, I would probably be giving it a good test.  The film was developed by The Darkroom so that they could test their developer with this oddball film.  The film was developed in clip tests, with times set as 6.5 minutes, 7 minutes, and 8.5 minutes.  On the light table, I would say that the longer development time yielded the best overall results.   The Darkroom used Ilfotec DD at 1:4 dilution for their developing.  The Ilfotec DD RS is equivalent to Kodak's T-max RS developer. 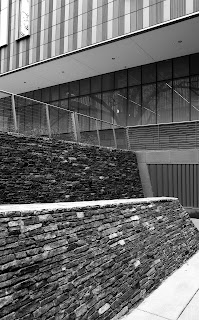 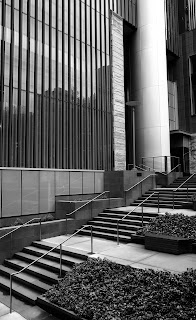 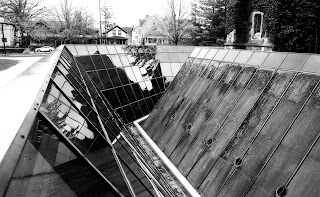 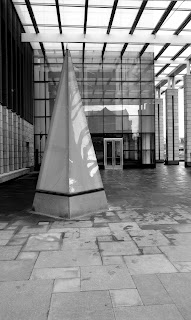 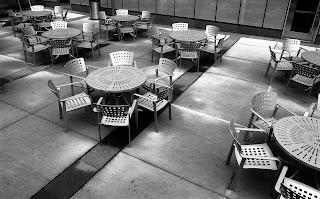 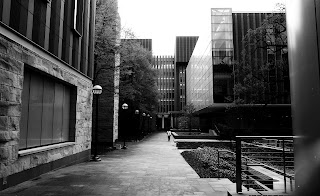 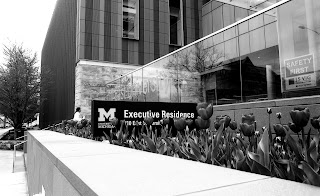 I have to say that I am absolutely thrilled with the sharp, contrasty and nearly grainless images from the Film S.  It reminds me of Kodak's Technical pan film, but without having to use a special developer. The architecture subjects were perfect for this film.  The ISO of 50 isn't all that slow, and the shots were all done hand-held.  The film's strengths really showed in the images that are crisp and highly detailed, with really good tonal separation.

On May 3, I shot the Film F in Chelsea, Michigan, also with the N2000 camera but with with the Lensbaby Velvet 56 lens.  The sky was  bright overcast.  The film was also developed by The Darkroom as before, with times of 7.5 minutes, 8.5 minutes, and 10 minutes.  Based upon the film on the light table, I'd say that all of the times ended up similarly, though the 10 min. time was certainly denser.  I can see that the film certainly has a similar response to sunlight as the Polypan F film that also lacks an anti-halation layer. 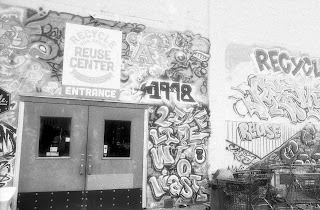 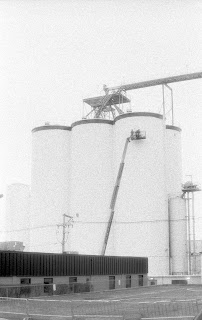 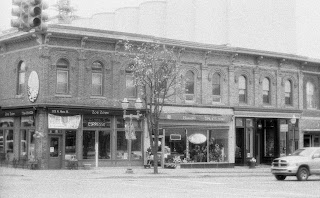 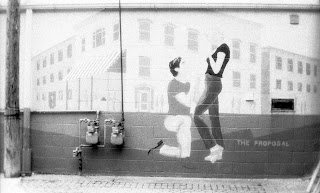 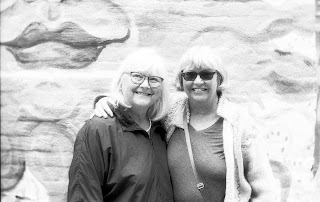 Film F is more of an "atmospheric" film -- there is of course, grain, and the blooming diffusion, especially when you have a white subject, is quite noticeable, as well as the low-contrast.  Now, that does not mean it's a bad thing, and if that is the look you wish to go for, by all means give the film a try.  The lack of an antihalation layer means you'll want to make sure that you use shorter exposures, if possible.  Longer exposures will cause more diffused results, but maybe that's not a bad thing if you are going for that look.  I used the Lensbaby Velvet 56 lens, which also may have contributed to the overall look in the results.  I'll bet the film would be an interesting one to use with models.

This is the beauty of shooting with film.  There is a film for whatever look you want, and not every film will give you the same result.  My takeaway from using these two films from Film Washi is that Lomig Perrotin should be commended for bring interesting and unique film stocks to market.  I don't expect every film to be to my taste and subject matter, and only you can appreciate what these films can do when you try them.  I certainly adore the Washi S film, and want to try more in the future with other subjects and conditions.

[Note:  I fixed the developer information on 6/25, as soon as I found out from The Darkroom]