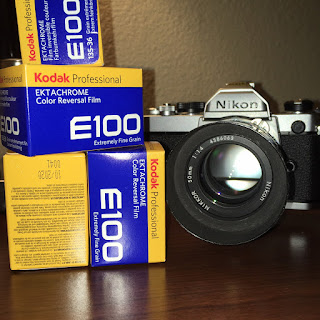 Last October, I received my five 35mm rolls of the new E100 Ektachrome that I had ordered from the FPP store.  Of course, I was elated to see Kodak Alaris finally ship their product after what seemed to be a long wait (not anywhere as long as Film Ferrania!).  Considering that this new E-6 film had some hurdles to overcome in the digital hegemony, I am pleased that Kodak Alaris took a chance on bringing it forth.  I have been shooting slide film since the mid-1970s, and while I don't shoot it as often as I did over a decade ago, I still find it relevant to my photography.

Since Kodak pulled out of the E-6 market in 2012, we have been left with only one E-6 emulsion manufacturer -- Fujifilm.  I'll admit that I have been shooting fresh Provia and some fresh and expired Velvia in the last few years, and there is nothing wrong with either film.  However, given Fujifilm's penchant for dropping well-liked film stocks, who knows how long before they are gone?

As a long-time user of film from Eastman Kodak, I loved Ektachrome, and its varied emulsions.  For me, an ISO 100 slide film was my mainstay when shooting nature and macro.  While faster emulsions were available, I used them far less often.  Kodachrome 64 was a superb film, too, though I shot it less often than E-6 film.  Since Kodak had withdrawn form making ANY slide films, I was using old stock that had been refrigerated.  The problem there, of course, is that as films age, the results will not be optimal.  So, I was pretty excited when Kodak Alaris announced in early 2017 that it was bringing a new Ektachrome into the world.  I didn't expect it to take over a year before it was available, but it has been worth the wait.

So far, I have shot two rolls of the new E100, and both were developed by The Darkroom in San Clemente, CA.  While I have an E-6 kit at home, I did not want my results tainted by personal goof-ups.  One roll was shot in my trusty Nikon N80 in Aperture-priority mode, and the other in my also trusty, full- manual Nikon FM.  I got the film back uncut, and cut it into 5-frame lengths to fit my archival print file pages.  I am not putting the film into slide mounts because it's easier scanning in strips.  I can mount it in mounts later, should I want to.  The film was scanned on my Epson V700 photo scanne at 2400 dpi.

As an experienced E-6 shooter, I trusted my instincts when shooting with this film, compensating for the lighting conditions when it was appropriate.  A polarizer was used in some instances.  I am very pleased with my results, and the E100 film is everything that I had hoped for.

Looks really good. Are these straight scans or did you do any post processing? If the later, did you post process to match the chrome exactly?

The only corrections I made were dust spot removal and in some cases, a bit of tweaking in the highlights. Pretty much it!

I've started using this film as well and gotten good results. I really missed E100G when it disappeared some years ago.

Great shots and great review Mark. I'm still finishing up my first E100 roll from FPP, and I will take a chance and develop it in the FPP E6 kit. I'll practice first developing a Retrochrome roll. Hope it works! I used lots of Ektachrome and Kodachrome back in the old days - like Kodachrome 25, can't believe how I got some of those shots with such slow film. The shot of the lighthouse & keepers house - are you a lighthouse aficionado like me? I have lots of lighthouse shots. --> Richard.