The Blue Waters of Port Huron

Almost a month ago I went on a road trip to Port Huron, MI and Sarnia, Ontario with my buddies John Baird and Marc Akemann. I finally have scanned in the second roll of Ektar 100 shot with my Minolta X700 from that day. Early April isn't the most summery weather, and it had cooled down from the record-setting March warmth of a few weeks earlier. However, it was a beautiful cloudless sky and just warm enough to not feel cold. We traipsed around the downtown a bit, and hit some of the areas along the St. Clair River. If you don't know much about Michigan, you should at least know that aside from the southern border of the lower peninsula and the south-western border of the Upper Peninsula, it is a state defined by the Great Lakes. Port Huron sits at the bottom of Lake Huron, and the St. Clair River flows S into Lake Erie. Across the water to the east is Canada. Fishing and boating are big along this corridor, and it was apparent in Port Huron. Of course, the St. Clair River is also a commercial waterway, with Great Lakes freighters coming through, and industrial areas along the shorelines of both countries near the urban centers. Like many small cities, Port Huron is not the place it was a century ago, but it seems to have held its own pretty well, and the downtown is a mix of old and new, with only a few empty storefronts. We had lunch at the Cavis Grill (really, it is more of a diner), and enjoyed our meal there.

Enough of reading. Here are some images from the morning there. All were shot with my Minolta X700 and a 24-70 lens or the 135mm lens on Kodak Ektar 100, which is a superb color print film that reminds me a great deal of Ektachrome. 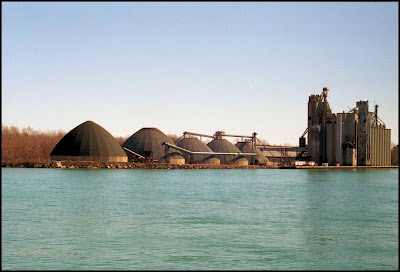 Looking over towards Sarnia, Ontario. The St. Clair River really was a opalesque turquiose blue. 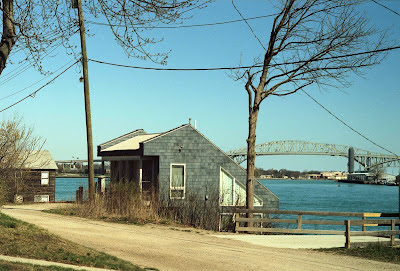 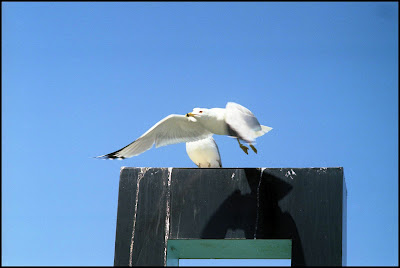 Ring-billed gulls are ubiquitous in the Great Lakes. Yet, I love watching them and their adroit flying skills. The ones that hang around the Bridge to Bay Trail (see following images) are probably quite vigilant in watching what the people fishing are doing. There are a series of sculptures along this sidewalk, and each one had a couple of attending gulls. 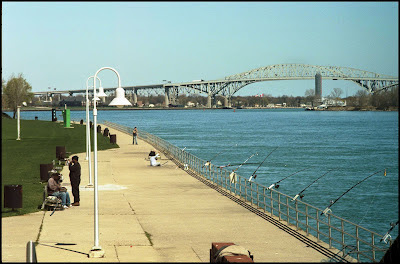 There were a number of people fishing along the river, and each person had multiple rigs set up on jigs to hold them on the railing. I am not familiar with fishing laws, but I know that when I did fish, I thought one was limited to no more than two rods in the water at the same time. I asked the guys what they caught, and said they got all kinds of fish there. I didn't see any activity while we were there, but fishing is like the ultimate test of patience in my book. 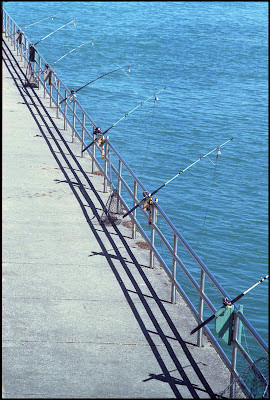 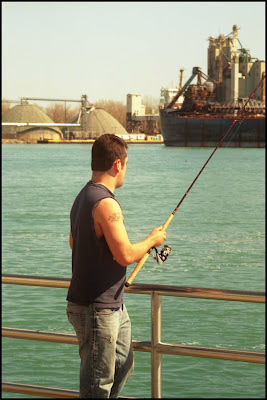 This guy was actually casting. 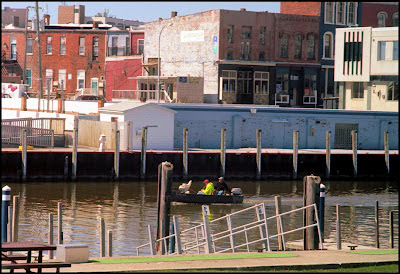 There are lots of channels and docks around Port Huron, and it is obviously a busier place in the summer months.

Well, that's it for this photo essay. It's always a different feeling when shooting film instead of digital. One is more economical with the shots, for one, and two, I think I generally put more care into the composition. Three, every film has a different characteristic, and that's what makes using it so much fun. Try some Ektar 100.

gorgeous photos you have.

nice idea.. thanks for sharing.

Great pictures of my hometown! I love taking pictures down by the water. Lighthouse beach is also a great place to take photos, as is the area down by the YMCA; you can get great shots of Chemical Valley in Sarnia. Again, great pics!
Matt