I have flirted with taking panoramic images for a long while. First there are the faux-panoramic shots - a mere crop of a 35mm negative so that only the center 18mm is used. Some toy cameras such as the Ansco Pix Panorama work that way, as shown below.

Then, I ran 35mm in a normal Holga using a special back and mask (reviewed here). It was basically a 24 x 58mm negative, and required one to open the camera in the dark to rewind the film into the cassette. Workable, but not the best solution. In the beginning of 2012, I saw an announcement somewhere for the new Holga 135 Pan camera, which takes standard 35mm film, and gives you a 24 x 72mm negative. I finally purchased one from Holga Direct in Hong Kong, and with shipping, I paid about $100. The camera arrived about 2 weeks after I placed my order, and last Saturday, I finally took the camera out to give it a test. 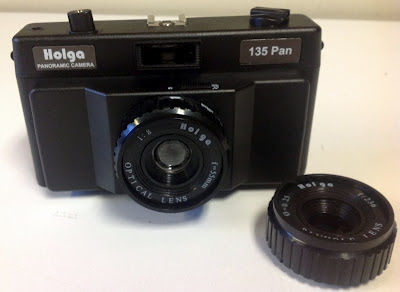 The features of the Holga 135Pan:
The camera comes with 2 lenses - a 55mm f/8 lens, and a pinhole lens with a f/236 aperture. The fact that one can remove the lenses tells me that people will be experimenting with this, which ought to be fun. I would not be surprised to see a wide-angle lens produced. The lenses have the typical Holga zone-focus icons. There is also a hot-shoe for flash, a wide-angle viewfinder that approximates the FOV of the lens. The shutter button has a socket for a standard threaded cable release. The toothed film advance is easy to use, and there is a film counter. You can shoot double exposures, so be sure to advance the film after each shot, unless you WANT multiple exposures. The shutter speed is approximately 1/100 sec. There is also Bulb mode for long exposures. 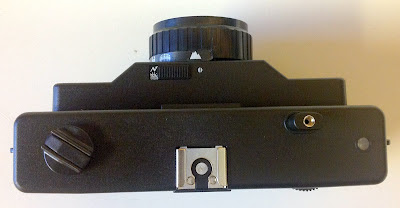 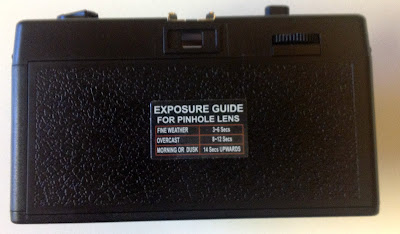 The instructions say to use 400 ISO film. Given the shutter speed, I think one could safely shoot ISO 100 or 200 on a nice bright sunny day. I used a roll of Kentmere 400 b&w film for my test roll. Since this is a panoramic camera, it is probably a good idea to use it on a tripod and make sure the camera is level. However, it IS a Holga, so I imagine people will want to shoot it all sorts of ways. If you use the pinhole lens (which I have not yet tried out), you will definitely want to use a tripod and cable release. The back of the camera has suggested pinhole exposure times, using ISO 400 film. That's a handy feature.

My First Impressions:
The Holga 135Pan isn't a Hasselblad X-Pan, nor did I expect it to be. It's a Holga, so you should expect lens aberration, flare, soft-focus, and vignetting with the 55mm lens. The camera is as simple to use as the Holga 135BC, or any other simple camera. I think it's actually pretty well made -- certainly sturdy enough for typical use. Once I got used to the feel of the camera, I found it to be smooth in operation. However -- make sure that you don't have the shutter set to "B" when you want the normal shutter speed, and remember to check your focus ring. The B setting is easy to do if you are not careful. Now that I have shot and processed one roll, I am pleased with the results thus so far. Shooting a panoramic image doesn't work for every subject or situation, but I expect that once anyone shoots a few rolls with this camera, that will become clear.

First, my sheet of negatives... 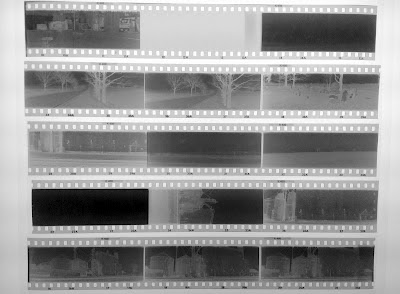 A few double-exposures, some overexposures, and a non-exposure. See, I am not perfect. :)

However, I have to say, that for a trial run on a cloudy and misty day, the results were not bad for a Holga. I scanned the negatives in on my Epson flat-bed scanner at 2400 dpi.

I am especially pleased with these two images. Getting the framing exact will take some time as I get used to the camera. Getting some pinhole photographs will be the next step. The beauty of this camera is that you can shoot pinhole or normal, just by changing the lens, which merely screws on. I imagine the price might turn off a few people, but seriously, who else is currently making a camera like this? It's a small market, and kudos to the Holga folks for producing the Holga 135Pan.

Looking down the St. Clair River in Port Huron, film is Fuji Superia 200.

You can also go Vertical with a panorama... This is a Marshall Fredericks sculpture in Port Huron.

Posted by mfophotos at 1:07 PM 9 comments: Links to this post

On February 26, I drove across the state to Berrien County, which lies near the S end of Lake Michigan. My fellow photographer, Abby Alvarez, accompanied me and we had a great time exploring Warren Dunes and Grand Mere State Parks. I really didn't know what to expect to find, as it's been years since I have been to Warren Dunes, and it was always during the summer when I visited. Winter has been fleeting, but to my amazement, the dunes had some wonderful textures created by layers of snow and sand. It made walking up one of the large dunes quite easy, as the sand was semi-frozen. In addition, there was a really stiff, cold wind blowing up from the face of the dune, which I think I could have flown into if I had been wearing one of those wing suits (and gotten a face full of sand...).

I had decided ahead of time that I was going to shoot some of my remaining Kodak Technical Pan film. I brought my Nikon F3HP annd several lenses for the b&w shots, and my trusty Pentax ME with color film for everything else. I put a polarizer on the 24mm lens I was using for most of the dune shots, and right away, was looking at nearly a 2-stop light reduction. TechPan is rated at ISO 25, meaning that if I decided to shoot at small apertures, longish exposures were going to be the rule. I used my Bogen tripod, and for the most part, my results were pretty good, although on close inspection of the negatives, I could see that the stiff wind definitely had an effect on a few shots. Next time, I'll bring the really heavy-duty tripod.

Warren Dunes State Park encompasses about 1900 acres of land, and has campsites, and of course, a huge beach area. It is usually swarming with people in the summer months, and the campsites are almost always filled. The largest dune is over 200 feet above Lake Michigan. Going there in the winter provides one with a much different experience. We saw just a few cars in the parking lot, and watched with great amusement as a family was sledding down one of the few spots with snow on their plastic sleds. The combination of sand-covered snow and frozen dunes, ghost trees that had been uncovered by the dunes, as well as the winter forms of living trees, gave the main dune a very stark, post-apocalyptic appearance. Shot with the Pentax.

I developed the TechPan film in Technidol LC developer. I have enough of that to shoot about 10 rolls of TechPan, so it looks like I will run out of film and developer at the same time. Looking up towards the big dune from just above the parking lot. I really liked the ghost trees towards the top. These are trees that were once buried by the dune, and then uncovered as the sand blew elsewhere. The patterns in the sand were amazing. In the summer, blowing sand covers everything. This looks like an aerial photograph taken from about 60 miles up.

The polarizer really made the scenes "pop." However, I also noticed a bit of vignetting from the filter. Next time, I will use the 62mm filter on that 52mm lens. 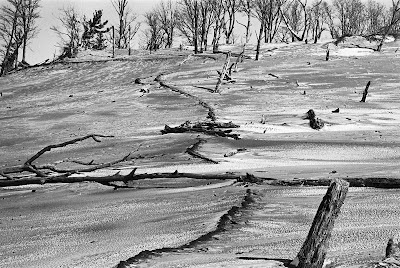 I'll post more images in Part 2, as well as shots from nearby Grand Mere State Park.
Posted by mfophotos at 1:51 PM 4 comments: Links to this post