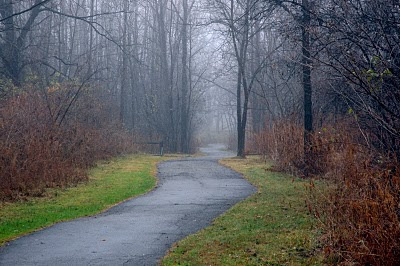 Today is Thanksgiving Day, an annual ritual of stuffing one's self (not to mention the turkey). Adrienne and I made it an easy day -- and did not go overboard on the food. With just the two of us having dinner this year, there's no point in cooking up too much. However, the pumpkin AND the pecan pies were very, very tasty. Before I got the turkey breast in the oven I made a little trip over to Parker Mill and the pathway from Gallup Park. There was a fog that was up away from the ground, but it gave a soft, sublime feel to everything. Sometimes, that's just what I want.
A little ways farther on the trail, I stopped over at Fleming Creek and really liked the reflections on the water as it flowed over some rocks and branches. Posted by mfophotos at 11:28 PM No comments:

‘Tis the Season... For Exhibits Although I do a fair amount of photography in the winter, it’s not my favorite time of the year to be holding a camera. However, if winter’s short days and cold temperatures force you indoors, you may as well take advantage of it. It seems that these things happen in bunches, and here are some upcoming and current photography exhibits that bear visiting. In the case of the Met... I DEMAND that you visit, um, I mean, make a pilgrimage (what better time of the year to use the word pilgrim!). So, let me start with that.

STIEGLITZ, STEICHEN AND STRAND at The Metropolitan Museum of Art, NYC. 11/10/10 - 04/10/11. Talk about three pillars of photography! Stieglitz, a photographer of note, but in reality, the man that brought modern art to America. Steichen, his protege’, who finally rejected pictorialism and became a master at portraiture and commercial photography (much to the dismay of Stieglitz), and as curator of the MOMA created the famous Family of Man exhibit; and Paul Strand, whose stark imagery redefined the post-pictorialism period. The two are connected to Stieglitz in oh so many ways. This monumental exhibit should probably be on the list of anyone that loves good photography.

THE MEXICAN SUITCASE at the International Center of Photography, NYC. 09/24/10 - 01/09/11. If you recall the intense excitement of the finding of the suitcase in Mexico with 4500 negatives from Robert Capa, David Seymour, and Gerda Taro that were long considered to be lost, you will want to see this exhibit. From the ICP press release: “These three photographers, who lived in Paris, worked in Spain, and published internationally, laid the foundation for modern war photography. Their work has long been considered some of the most innovative and passionate coverage of the Spanish Civil War (1936–1939). Many of the contact sheets made from the negatives will be on view as part of the exhibition, which will look closely at some of the major stories by Capa, Taro, and Chim as interpreted through the individual frames. These images will be seen alongside the magazines of the period in which they were published and with the photographers' own contact notebooks.”

Much, much closer to home (for me, at least):


AN INTUITIVE EYE: Andre Kertesz Photographs 1914-1969. Detroit Institute of Arts, 11/24/10-04/10/11. Nearly 100 photographs by Kertesz from his early days in Hungary and Paris, as well as later on in New York. Kertesz remains one of my favorite photographers -- his observant style of photography combines abstraction with elements of photojournalism. I’d say that this is a MUST SEE.

Class Pictures: Photographs by Dawoud Bey. Grand Rapids Art Museum, 01/21/11-03/20/11. “Dawoud Bey’s photography is community focused and collaborative in nature. Between 1992 and 2007, Bey traveled to six high schools in the Midwest and on both coasts. As artist-in-residence, he photographed students from across the economic, social, and ethnic spectrum. Class Pictures presents forty large-as-life photographs from this project.”

Posted by mfophotos at 1:55 PM No comments:

A Tendril Into the Past - Margaret Bourke-White at the Museum

I was looking through some ancient back issues of "The Ark" for some information about a particular expedition. The Ark was a newsletter published by the UM Museum of Zoology back in the 1920s. It's filled with a lot of interesting information about the museum before and shortly after it moved to its present location in 1928. However, I stopped at one page from the March 1923 issue and realized that I had just read an unremarkable statement about a most remarkable photographer. 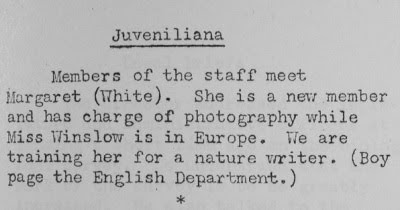 The Margaret (White) shown here is none other than the woman who would later be known as Margaret Bourke-White, one of the great photographers of the 20th century. Of course, nobody at the Museum would have known that the young woman working in the darkroom would become an extraordinary photojournalist, with iconic images on the cover of Life magazine. At that time, photography was still considered to be pretty much a male domain, and it's a testament to Margaret's talent, vivacity, and audacity that she was able to overcome the barriers to women and reach the highest level of her profession.She was a star, and though it is true that her looks and charm may have gotten her into some assignments -- she came away with the goods and got photographs nobody else could get.

Margaret entered U-M in 1922 (after having spent year at Columbia Univ, where she studied photography under the pictorialist Clarence E. White) and originally wanted to study Herpetology. Alexander G. Ruthven, the Museum Director and herpetologist, offered her a temporary job in the museum darkroom, hence the little blurb in The Ark in 1923. Although studying in the sciences didn't work out for her, Margaret apparently had a life-long interest in reptiles and amphibians. 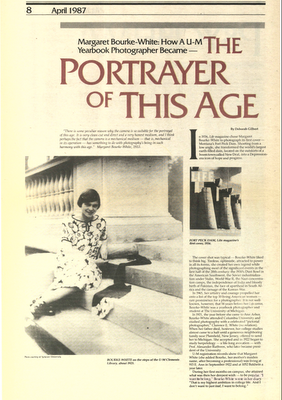 It was at Michigan where she began photographing and building a portfolio, though she apparently did not regard her early work there as worthy of mentioning in her autobiography, Portrait of Myself. However, Deborah Gilbert's 1987 article in Michigan Today (first page shown here) provides some details on Bourke-White's two years at Michigan. I now know that she lived at 915 East Ann and 1052 Baldwin. While at Michigan, she photographed many of the same structures that I, and many other photographers find of interest. In the 2005 book, Margaret Bourke White: The Early Work, 1922-1930, there are a number of U-M photographs featuring the Cook Law Quadrangle, the Michigan Union, and the campus along South State Street. The old Museum was barely visible in one photograph, and that very classic building was demolished in the 1950s. Gilbert (1987) proposed that the dark and murky photos that Margaret took at that period mirrored her emotional state. It's very likely the emotional scars from her time at U-M stayed with her until she wrote her autobiography, which is perhaps why she didn't mention much about her start at U-M.

Margaret Bourke-White's stay at Michigan might have been longer, but she married engineering student Everett Chapman in 1924 and the two of them went to Purdue in 1925. It was an ill-fated marriage, lasting barely a year. Margaret left for Cornell University and graduated in 1927. From there, she went to Cleveland, operating a small studio, and the rest as they say, is history, as she rose to prominence after working for Henry Luce at Time.

Women In History site
Posted by mfophotos at 12:12 PM 2 comments: