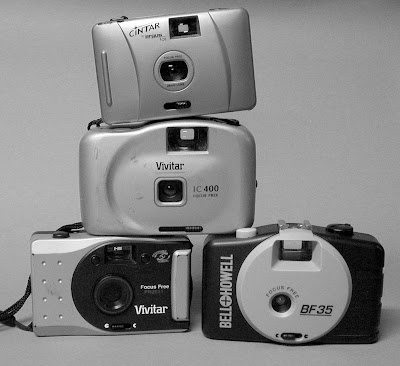 This year, WTCD is OCTOBER 18th.  That's a Saturday.  Get your rear in gear and go shoot with a toy camera!  The flickr group is: http://www.flickr.com/groups/worldtoycameradayand_then_some/
Posted by mfophotos at 10:38 PM 1 comment:

Last week, Mike Myers and I set up the photographs for the A3C3 show at the Found Gallery in Kerrytown. This was a different type of show for us, as we are showing off our work in a store devoted to antiques and art made from "found" items. Mary, the owner, is enthusiastic over the show, and has incorporated a vintage photography motif to accompany the images. I'm pleased with how the exhibit has come together. This show is comprised of the work of only 4 of us, which I believe is a better way to showcase our work. Having only one or two images in a larger show with a dozen other photographers is definitely less exposure for a photographer. With more pieces on the wall you can better connect with your viewers, and potential buyers, since you are offering them more choices. I know, it's not really about the "selling." Riight. Almost anyone that sells a photo will tell you that it's the best validation of your work. We have the reception this Friday, October 3, from 7 - 9 pm. Receptions are often when one makes the sales. In this case, having the photos in a store for 3 weeks will undoubtedly be even better. I'll be interested in seeing how people react to the photos by Bill Bresler, John Baird, Mike Myers and me. Some people don't understand the Crappy Camera part, but once they view the images, I believe they leave their misconceptions behind, and see the art. Despite the onslaught of digital imagery and the pervasiveness of Photoshop, people are often quite surprised at what we can do with relatively simple cameras. In the end, the photograph speaks for itself.

Posted by mfophotos at 12:23 PM No comments:

Another Show Coming Up! Posted by mfophotos at 2:13 PM No comments:

The show opening was great! Matt, John, Mike, Ross and I met on the afternoon of the 9th to hang to show. It didn't take us all that long, and I think they made great choices on placing the images. It looked great, and on Friday night, the 12th, we had a wonderful reception. I'd estimate 60 people showed up, and many stayed for a long time to socialize, eat and drink, and view the show and the Argus Museum. I was glad that Carol and Martha, Gene's daughters were there to be part of the reception, and I believe it was a feeling of closure for all of us, as the show was dedicated to their parents, Gene and George O'Neal. MiPHS also was one of the hosts for the reception, and a few MiPHS members attended -- I would have liked to have seen a few more there, but for a few, it was their first time at the Argus Museum. I also think we may have gained a member or two in the process. I spent a lot of time talking to new visitors to the museum, and I think everyone really enjoyed our photographs. There is a nice variety, and overall, it was a pretty easy show to put together. We had plenty of wine and food, and ran out of time before the refreshments ran out! Today, four of us were at the museum to be part of the Old West Side Home Tour. The Argus Museum was part of the tour for the first time since the Argus building was reclaimed from UM and renovated in 1987. 187 people viewed the museum and the photo exhibit today, and it was a lot of fun talking to first-time visitors to the museum, most who never knew it was there, even though they lived closeby. Lots of nice comments on the photography, and it was a pleasant way to spend a mostly rainy afternoon. The exhibit is up until October 12, and will be viewable 9 to 5 pm during the week. The Argus Museum is located at 535 West William Street, Ann Arbor, MI.

On With The Show It's been a while in the planning, but things have come together for the second exhibit of work done by a number of participants in the Ann Arbor Area Crappy Camera Club (A3C3). I'm organizing this show, and it's been something that I have wanted to do for quite a while. Having a show with contemporary images shot by vintage Argus cameras -- exhibited in the same building that once housed the factory the cameras were assembled in. I doubt that has happened before in the USA.

We don't have a huge space to show in, but we will feature about 10 photographers, with 1 or 2 images each. The idea is to showcase our talent, and what one can still do with 50 year old Argus cameras (made right here in Ann Arbor, MI). I hope the visitors enjoy the display.

The second aspect of all this is that we are dedicating the show to the memory of Gene and George O'Neal -- two people that instigated the idea of the Argus Museum (where the show is held), and played a large part in the Michigan Photographic Historical Society. Most A3C3 members never knew Gene, as she passed away in 2005. George however, became a regular attendee and participant in our outings until just before his death last year. The A3C3 wanted to also honor him with this show. I think he would have been overjoyed with this.

Well, off to work on the show materials, and hope that 2 more photographers come through with the images this weekend. We hang the show on Tuesday night. I hope to see a lot of happy faces Friday night.

ps. - Thanks to Ralph Krawczyk Jr. for designing the show announcement. The hours on Sunday 9/14 are my mistake -- it's really 12-5 pm.
Posted by mfophotos at 9:02 AM No comments: