Over the years, the Eastman Kodak Co. has produced some wonderful cameras. On the balance, they have also designed hundreds of somewhat crappy cameras, intended as cheap and reliable, if quite ordinary picture-takers. So, for every few dozen Brownies, Starflashes, Instamatics, and Disk Cameras, there is one meaningful camera. You can count on fingers, the number of remarkable US-made Kodak cameras that were produced. I recently acquired one of them from the estate of my departed friend, George O'Neal. This camera, the Kodak Medalist II, is a metal-bodied medium format rangefinder camera that makes 6x9cm negatives on 620 film. The Medalist II was produced by Kodak from 1946 to 1953, and was intended as a "pro" camera. There are a additional backs that can be used with the camera, allowing one to do close-ups using the backs and sheet film. The shutter ranges from B to 1/400 sec., plenty fast enough for most uses. The Medalist II also has a flash-synch using the Kodak post and not a PC connector (which is unfortunate). The lens turns out with a large helical that when fully retracted, locks the shutter release. The film automatically stops and the shutter cocked when the film is advanced via the winder (but you need to use the read window to start at 1). The rangefinder window is somewhat puny, but it does work, and there is also a dial readout on the top deck of the camera to show the distance and depth of field. The 100mm f 3.5 Ektar lens is highly-regarded and the out-of focus areas are smooth.

I took the camera out yesterday to give it a try in the conservatory at Matthaei Botanical Gardens. As it was my first time with this camera, I didn't expect every image to stand out, and for the most part, I am very happy with the camera. I look forward to giving it more of a workout soon. Posted by mfophotos at 5:30 PM 5 comments: Links to this post

I WON'T SHOOT MY EYE OUT 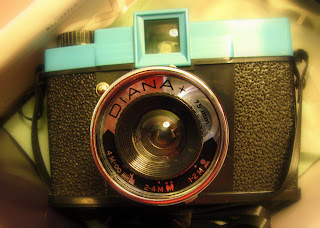 Adrienne, my wife of 29 years, asked me what I wanted for Christmas this year. Since I really don't need anything, but I did want the new Diana + from Lomographic, that's what I told her, and she did buy me one! Now, I know there have been a few detractors of the new Diana+. Of course it's a cheap plastic camera, but I have to say that I am impressed with the features, and that LSI didn't merely copy the old design, they improved on it, in ways that will please photographers that use Crappy Cameras. The new pinhole feature is a great idea, and so is the little device they include to keep the shutter open for long B exposures. The addition of the tripod socket is MUCH appreciated! The hardcover book included in the kit is nice. No doubt, it adds to the price tag of the Diana package, but I'm glad I have it. Some of the writing seems a bit random, but the images are fun.

I love this -- the perfect anti-techno gift with unlimited creative potential. Better than tinkertoys, erector sets, and the chemistry set. And, unlike the Red Ryder BB gun, I won't shoot my eye out. But, I'll be shooting film, and that's what I am going to do this afternoon. Have a nice holiday, in whatever way you celebrate it.

Posted by mfophotos at 11:42 AM No comments: Links to this post

I have been busy getting the equipment from George O'Neal's estate ready to sell on ebay, and it has been an interesting experience so far. I'm enjoying the various cameras and photographic items, even though they are being sold. I have long gotten over the urge to collect so many things, and the experience over the past year with several estates of deceased photographer/collectors has allowed me to handle a lot of cameras that I otherwise would never see. In my case, handling these old cameras and sometimes using them for a short time is just fine, as I don't need to own a slew of old cameras. I already have quite a few (as does my daughter Marjorie), and I have been paring down my collection a bit, as well. Working with the cameras from George's estate has been fun, for the most part -- How many times might one get to handle an Ernemann Ermanox camera, or some other rare or unusual cameras? Of course, I am not going to show those here, but instead, an example of what I consider to be one of the best American examples of a rangefinder camera. Argus' C-4 was a sturdy camera, operationally and aesthetically superior to the C-3 brick. The only thing lacking with the C-4 was the ability to mount a lens other than the sharp 50mm 2.8 Cintar.
In 1954, Geiss-America Corp. designed a lens mount to retrofit the C-4 to accept a series of lenses imported from Enna-Werke in Germany. As far as bargains go, the $10 charged by dealers to have the mount added to the C-4 by Geiss was amazing. It only was available for 2 years, from 1954-56, after which the C-44 appeared with its interchangeable (and inferior) lens system. As much as I would have liked to have acquired a Geiss-C-4 a few years ago, I know I wouldn't use it much, even though it is a pretty nice system, so I didn't even consider acquiring it for myself from George's estate. It will be interesting to see how high this outfit goes for on ebay. 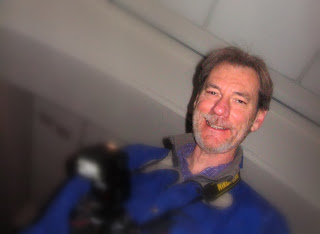 during our lunch hour. As it so happens with many of my non-work friends, we met online via Flickr. Kate e-mailed me last night that she was being interviewed as part of a piece on social networks, and that the Ann Arbor News was going to send a photographer over to shoot us during our lunch-time meetup today. We met up with Robert Chase, a long-time AA News photographer by the UM Union, and he followed us around shooting photos of us, and it was nice talking with him while we wandered over to the Law Quad on a cold snowy day. Finally, we had enough of being out in the cold and snow, and returned to the Union for something warm. Bob followed us there and took a few more shots and chatted with us while we warmed up. Kate and I were both shooting film, and Bob of course, was using his new Nikon D300 - a very nice DSLR. I was using my newly-acquired Nikon F, which made quite a contrast in technology.

I pulled out my little Canon A570 and shot this photo of Bob Chase while not looking through anything, and fixed it up in Picassa a bit. Anyhow, this isn't the first time I have been followed around by an Ann Arbor News photographer, and it will be interesting see what the article says and what image the editor decides to use.

I find it interesting that some people feel that the Internet creates recluses -- but so far, in my experience, it has opened up new avenues, and provided me with new friends that I have often met in person. The web is an amazing vehicle for social networking, and I have made many good friends via Flickr.

Posted by mfophotos at 2:01 PM 2 comments: Links to this post